A new project Neabot robot vacuum is coming now that could bring a lot of innovation and finesse. We’ll tell you right now in the article if it will be a success model.

The financing goal of the Neabot has already been reached, but the vacuum robot can still be bought at GadgetPlus for $499 (Early Bird). Later the robot will probably cost $599€, so it might be worthwhile to finance it now.

The American manufacturer iRobot dominates the market with extraction stations, but it does cost quite a bit of money. Other manufacturers like Lenovo try to keep up. And cost considerably less. Neabot also wants to fit into this category.

Packaging and scope of delivery

The package that awaits prospective neabot automatic vacuum owners is huge, but the contents are absolutely manageable. Quite a bit surprising.

In the scope of delivery you will find the robot itself:

The scope of delivery already makes it clear: With the extraction station, the new bot is modern, but otherwise relies on tried and tested equipment. It is not a hybrid model, i.e. it cannot wipe, which I honestly welcome. The wiping function on hybrid models is not yet so mature that one would really enjoy it and make work easier. When I took a look at the underside of the robot, I thought to myself: Maybe the wiping function will be delivered later … hopefully not. It’s not exactly a good idea to attach a tank with a cloth to it, which the robot then pulls behind it.

I like the fact that they prefer to bring out a solid vacuum robot instead of a half-baked hybrid model. But the main focus of the new model is certainly on the extraction station.

The extraction station of the Neabot

Extraction stations that automatically empty the dust chamber of a vacuum robot are no longer a world first. However, for completely autonomous working while we are on the road, this is an important step – albeit clearly a luxury product. After all, the robot’s dust chamber can also be easily removed by hand – as is usually the case – and emptied over the trash can.

The extraction station is also the charging station of the new bot and – at least in crowdfunding – does not have to be ordered separately. The content of the robot dust chamber is vacuumed at the bottom by a feeder into the station and ends up in a bag at the top.

iRobot makes these dust bags cost quite a bit for their models with extraction station. Here one can only hope that the bags for the Neabot will not become so expensive later in the trade. With the Amazon sales targeted by the company at least the demand for them should be covered.

When the robot drives to the station after cleaning, the battery is charged and the dust is extracted from the 0.6 l dust chamber. This also works perfectly, but has a huge disadvantage: sucking in the dust chamber contents with 1000W requires corresponding power, but does this have to bring 85 dB volume to the sound level meter? Uiuiui, treat yourself to an example (maybe not at full volume): 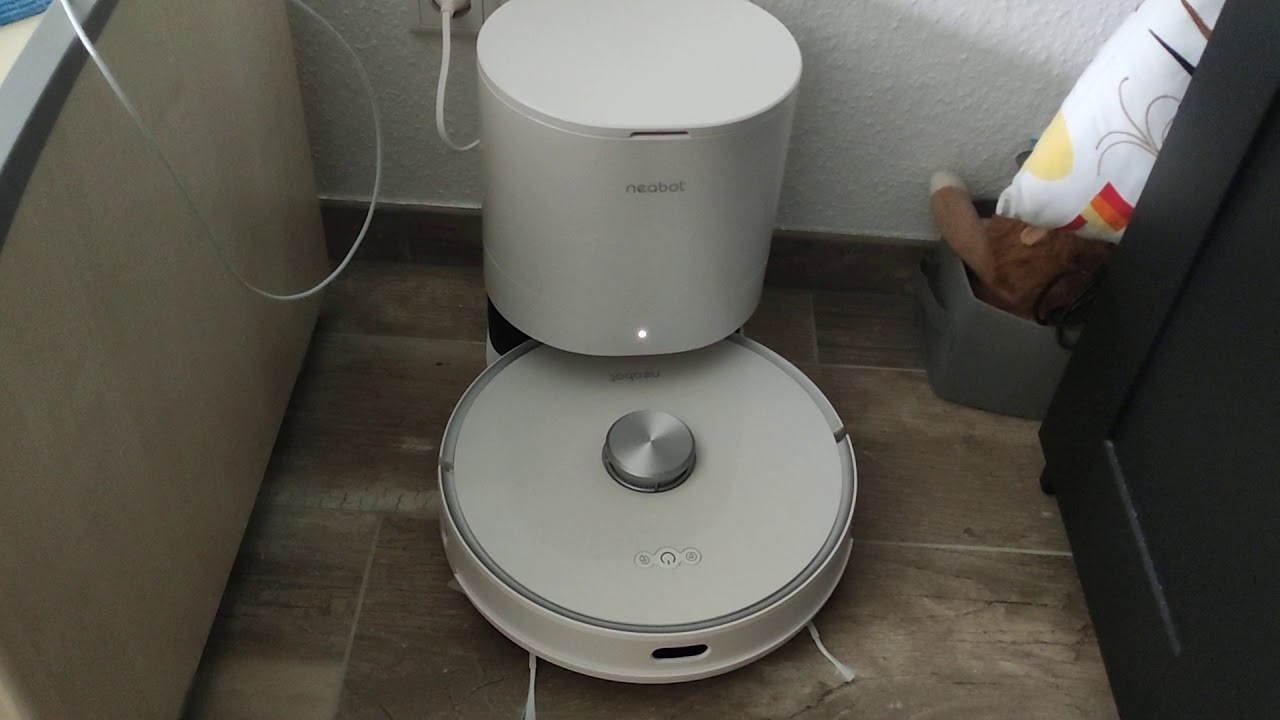 And yes, the vacuuming is also so loud in other models. Anyway, my guess is that both robots were given the same station. Now what do you do with the volume? Inform the neighbours and let the robot work while you are not at home.

You don’t have to use the station either, you can also switch off the extraction function in the app or select only a certain frequency of extraction. So if it is not often dirty, you can vary it.

The Neabot looks really good from my point of view, but the resemblance to the Roborock or Qihoo 360 models cannot be denied. In terms of workmanship there is nothing to complain about, everything is clean and solidly finished. The plastic used is also of high quality and doesn’t make the robot look cheap. A CE mark would have been nice, but that will probably be settled in the official sale.

If you don’t want to control the robot via remote control or app, you can also use the two controls on the top. But this limits the control very much: On/Off, start, stop on the middle button, the charging cable symbol sends the robot back to its charging station. The button on the right is a kind of mini-room-work mode that allows the robot to vacuum in a few square meters around itself. So to speak area cleaning, only that you have to place the robot in the area yourself. It’s easier via app, more about that in a moment.

Because of the LDS on the top the robot gets the dimensions 35 x 35 x 9.6 cm, which is quite high. Here you have to make concessions in favour of the most mature version of navigation and measure various pieces of furniture before buying. If the robot is to vacuum under the sofa, for example, this must be at least 11 cm above the floor and so on.

Before we take a closer look at the app control, a very short detour for those who don’t want to integrate the robot into App and WLAN. With the included remote control you can use the Neabot without an app. Thereby, some important functions are missing (no-go zones, selective room division etc.), but those who are worried about data collection can take countermeasures with this.

Briefly the functions according to the numbering on the picture, in case one of you gets the robot and wants to know what the individual keys are all about:

First of all the important hint that I was allowed to test a beta version of the app here, which will perform better In the official version.

Ah, little hint (maybe the app developers will read here): On the second screenshot below there is an error. It shows graphically that you should press the power and load button simultaneously to start the network integration. But it’s the outer two, not the power button.

To be honest, I am positively surprised that the integration into the WLAN was so simple and fast. This was not the case with all Kickstarter projects so far. Cool!

Functions and settings in the app

As already mentioned, the functions can still be tweaked on the software side. Here is an overview of the most important setting options and functions within the app 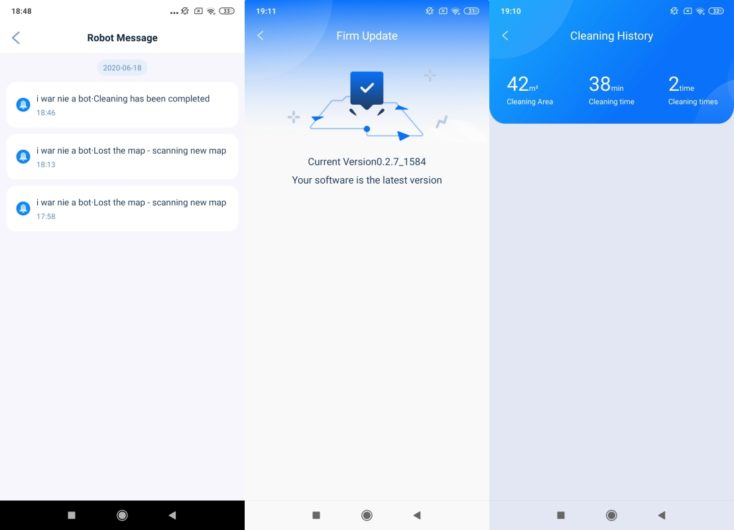 In one or two places the app is still a bit immature, which will surely be fixed. The Map Manager and the language packs still lead nowhere (loads very long). But there is still an alpha version, bugfixes and firmware updates for the robot.

Using a laser distance sensor (LDS for short, the turret on top) and a built-in SLAM algorithm (Simultaneous Localization and Mapping), the neabot scans the outlines of the four walls.

In doing so, he creates a virtual map of the premises, which can then be called up in the app. In this way, the user always knows where the robot is and can start it from the road. First the robot drives over the outer walls and obstacles, then it makes its way through the middle in straight lines. Looks like this in the app:

Six times a second, the LDS scans the premises at a distance of up to 6 metres. So you always have a live image in the app. A total of 29 sensors work in the robot. Particularly remarkable is the ability to overcome door thresholds, even with carpet edges it has no problem. And that, where most robots can’t really like my carpet and avoid it. The Neabot reliably overcomes obstacles up to 2.5 cm high, which definitely not all robots are able to do. On carpet the high suction power of 2700 pa is also noticeable, it pulls out a lot. 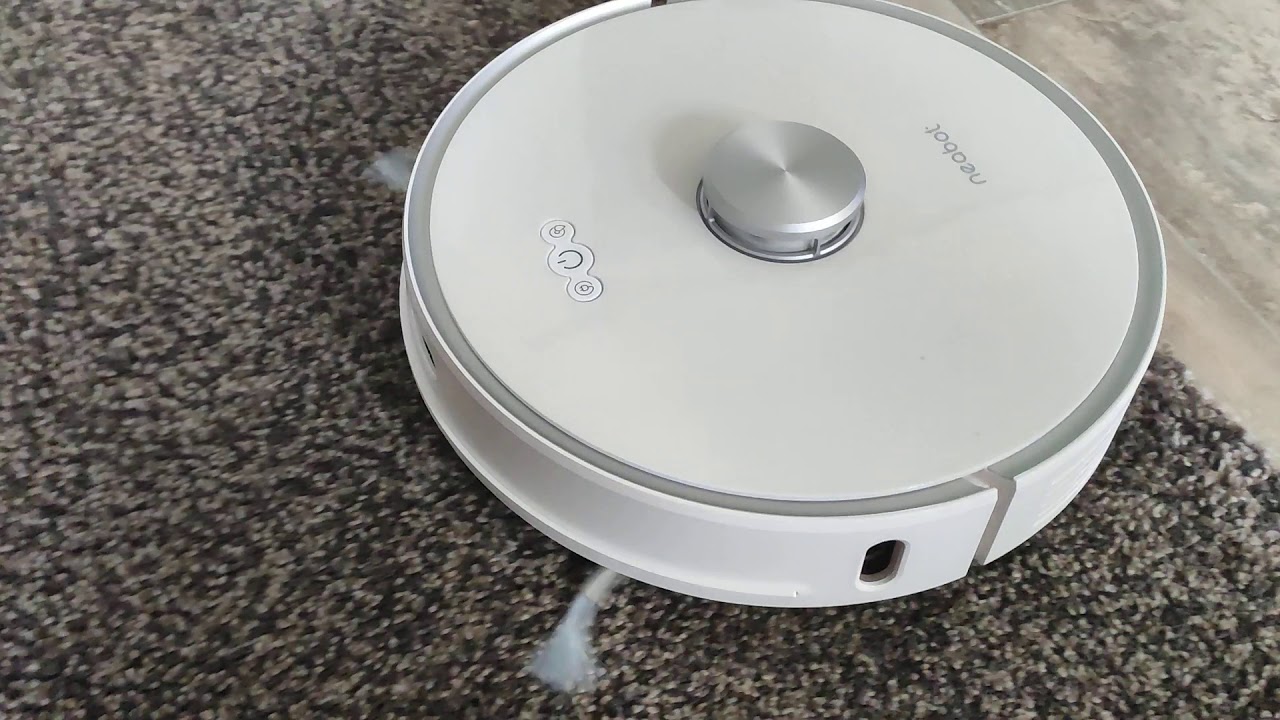 The obstacle detection is also praiseworthy, he has been taught the right balance between being too insensitive and highly sensitive. Apart from glass doors or vases, not much can happen. 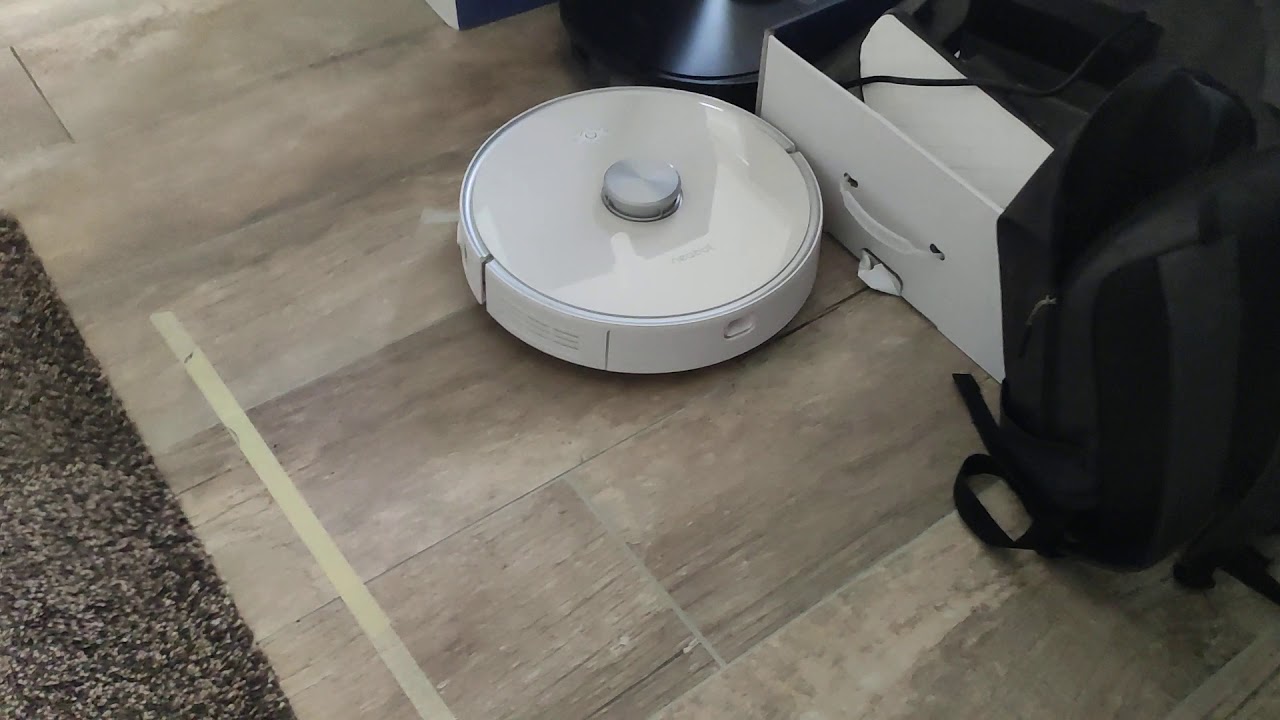 What he doesn’t do so well? The vacuum robot boss, my laundry rack: 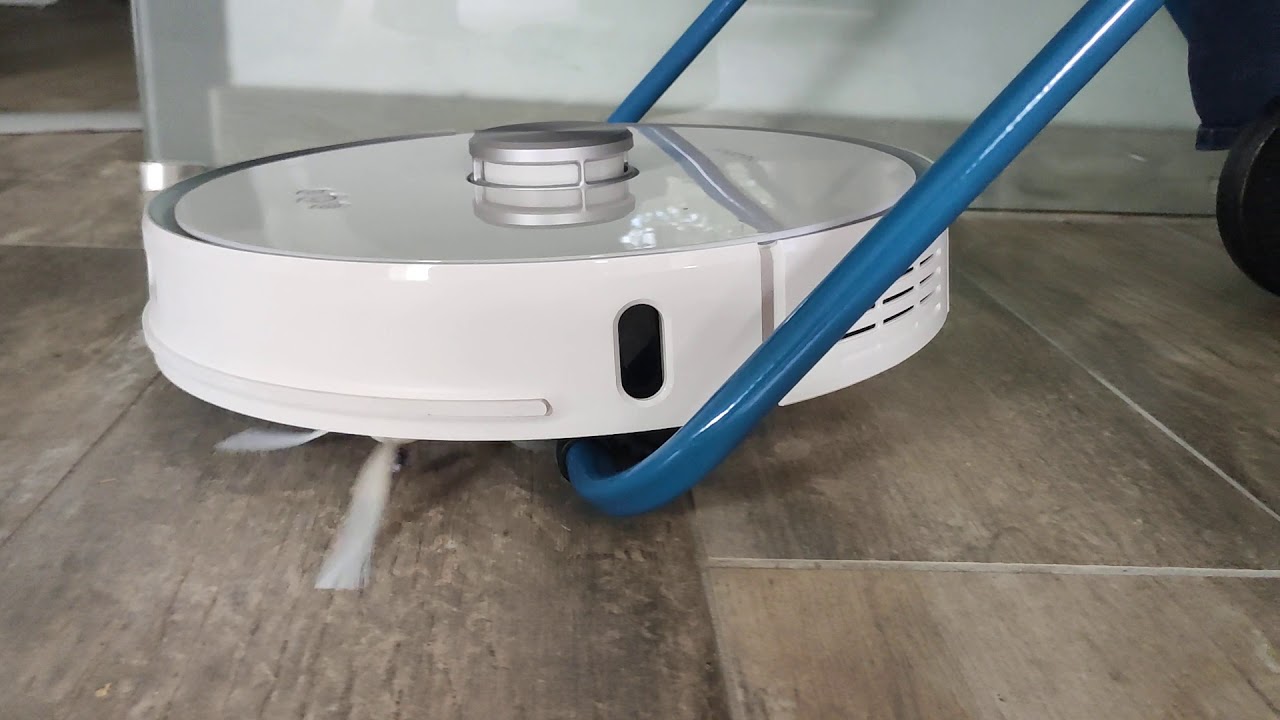 And he doesn’t like cables either, because he has no AI detection of small obstacles, like the Roborock S6 MaxV. But either way it is not yet so mature that you could accuse the neabot of not recognizing cables and not being able to avoid them. 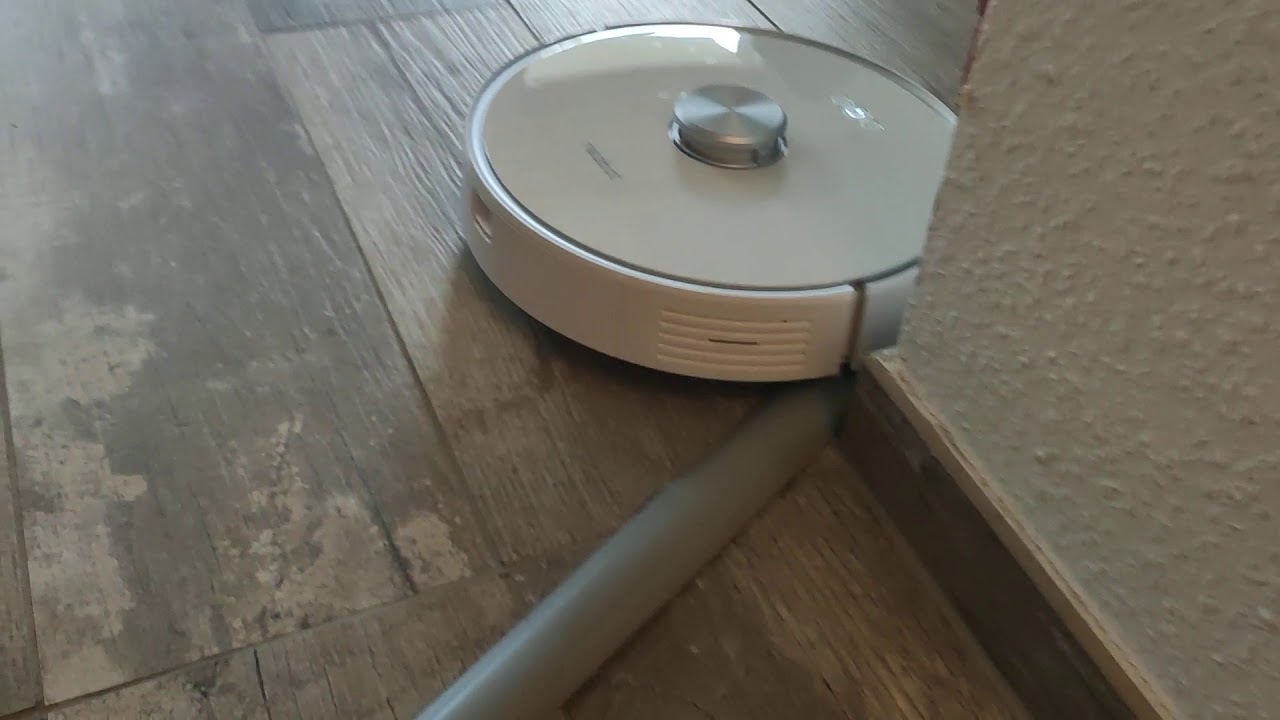 So what can you do to make him avoid cable corners and other areas that he should not approach? Ah, yes, no-go zones and selective space allocation.

No-go zones are self-explanatory in their terminology; you draw these virtual zones on the map and the robot avoids the drawn-in area. This also works with the no-go zone as it should – even during cleaning. It becomes more interesting when it comes to selective room division. Normally, a vacuum robot with this function carries out the division itself and the user can make some adjustments afterwards. The Neabot does not do this, the rooms have to be defined by the user.

While it is more comfortable and less fiddling if the robot does this on its own, it also rules out the possibility that the neo-bot is misdividing the rooms. In the end, it doesn’t make a huge difference and works well with both approaches. However, it is necessary to let the robot drive back from the charging station to the charging station completely autonomously at some point, otherwise the room division is not possible.

Preliminary conclusion: Buy Neabot?
I am surprised that everything is already working so well. The price of $499 is definitely justified for a model with extraction station and this range of features, especially considering that the neabot will cost around $600 later. I would not want to pay the latter price. By using an extraction station, continued cleaning and planning the working hours, the Neabot can become exactly what you expect from a vacuum robot: A domestic helper who works without any help – at least until you have to empty the bag of the extraction station. 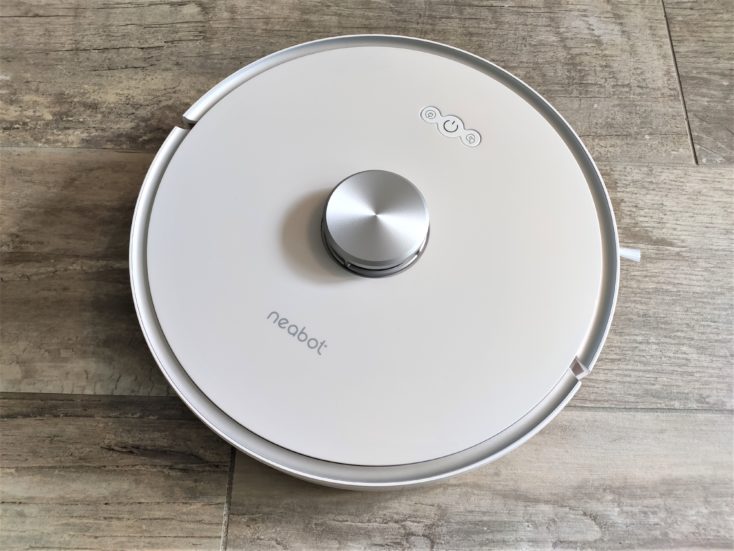